Ten Forest of Dean Athletic Club runners took part in the annual Devauden 10k race  this Monday.  The race, as the name suggests, takes place on scenic forest tracks around the village of Devauden, an area which is known among those who have taken part, not just for the pleasant surroundings but also for the many hills.  As such this is a relatively difficult race with a total of 240M of climbing.  Money raised goes to local good causes.

Three FODAC runners had particular success with Cherry Fowler coming 1st out of 50  in the F35-49 class with a time of 47:37.  In addition she came in ahead of all but one of the many younger women taking part finishing in 2nd place of 87 female runners overall.  Amongst the men, Walter Leach took 2nd place out of 27 in the M50+ class with a time of 48:58 while Dan Sandford ran a very fast race to take 3rd place out of the 55 runners in the M35-49 group in a time of 41:30.

Debbie Stenner and Victoria Baker had the same time.  Photo is of Cherry Fowler the F35-49 winner. 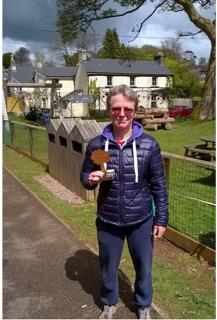