Gloucestershire AAA CC Championships is the recommended date of  6 Jan 2018 at Old Down Country Park.

Well the XC season is over & what a successful season it’s been Brilliant turnouts & support.

In the Glos League the Ladies managed to field at least 3 teams in every race finishing 7th, 15th & 16th overall.  Last year only one team completed all 4 races finishing in 14th so massive improvement.  They also came away with 3 medals too:  Bronze for the Masters &  Gold for Jacqui Wynds (LV60) & Silver for Sheryl Hall (LV45) 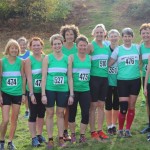 The men only managed to field 2 full teams at 3 of 4 meets but the A team finished 8th (up from 12th last season) with the Masters finishing 5th. Our most successful athlete was Chris Penny who won Bronze in the fiercely competitive MV40 category.

In the Gwent League both the Ladies & Men were in with a realistic chance of promotion, but the final meet in Dare Valley Country Park, Aberdare on March 1st was cancelled meaning the Ladies missed out.

Sherryl Hall was selected to represent the county at the regional champs & then in the County short course XC she won Gold. Chris Moore & Alan Robertson also picked up Gold & Silver respectively in the MV60 category.

Glos County Championships: A great success with medals for a number of FoDAC athletes + great feedback on our course, marshals & refreshments

Feb 8th Blaise Castle, Bristol. Yet again a fantastic turnout & strong performances from both A teams (in spite of half the men giving the field a 200m headstart!) left the men in 2nd nearly 1000pts clear of 3rd place. The Ladies moved up to 3rd within striking distance of second (even though Ann Nixon was the only scorer in Cardiff!)

Another cracking turnout & set of performances at Malvern on Nov 1st saw 4 ladies’ teams & 2 men’s. Both A teams were 8th overall with the Master’s A teams coming 2nd. The men were only 5 points from winning the Masters despite some notable absences. The men managed a full team at Cardiff on the 8th too to move into 2nd place in division 4 so on track for promotion. Well done to stalwarts Marcus, James, Dave, Scott, JB & Alan. Need a good turnout for Brecon now.

Many thanks to all the athletes who made the Octoberfest XC w/e a record turnout and especially the 10 who ran both days: Ann Nixon, Stef Francis, Lynne Park, Jackie Green, Marcus Bennetto, James Dobbing, Mark Mathews, Scott Berry, Roy King & Jules Boon.