The 2nd race of the Rose Inn series took place yesterday – Tuesday the 14th. As usual FODAC put out a good selection of runners, 20 of them plus our very own press crew – Otherwise known as Graham Bennetto who kindly took some photos.  After driving through heavy rain to get there, the race itself was dry and not too hot. Perfect in fact except for a pesky headwind on the return leg just when you were feeling tired.

First club member back was Jack Fleet in 22:46 which he tells me was two minutes faster than his PB last year, closely followed by Marcus Bennetto in 3:03. Leyton Fleet and Peggy Richards showed what competition really means by battling it out side by side for the whole 4 miles (see Graham’s picture) with Leyton finishing as 1st MV45 (out of 20) in 23:49 and Peggy a whole 1 second behind in 23:50. Oliver Rennison came in next with a new PB of 24:18 and would like to thank Leyton and Peggy for being such a good windbreak on the return leg. Fantastic results to all three of you.

Daren Smith strolled home to take 4th MV45 in 24:18 followed by Walter Leach, Alan Robertson who took 3rd MV60 with a PB of 27:29 and Jim Storrar (all fast as ever) and then Patrick Rennison in 28:26. Why have I told you that time? Because it finally got me that illusive 70% while a time of 28:27 wouldn’t have done. Thank goodness I sprinted at the end. That’s enough of me being pleased with myself now more important matters i.e. the Ladies.  Melinda Ruck who is relatively new to running, achieved a very credible 4th out of 15 in the FV45 class with a PB of 28:46 and was also 14th female overall – How much faster can she get?   (Note: the result sheet has you down as Mevinda! – sounds quite interesting) Rachel Nash took 4th out of 15 in the FV40 class while Karen Barnett and Vanessa Pegler took 6th and 7th FV45 respectively – all very good results.  Some new names to me (I’m not very observant so sorry if you have been quietly in the background all along) with Peter Hewitt finishing in 29:59 – if you were trying to get under half an hour you couldn’t have done any better than that – and Donna Sheen taking 7th in the FV35s.

Last but certainly not least a man who is so polite, he is known as our own MR PC – Peter Compton who out did many of us by finishing with a smile – see below. Have you done this race before Pete? If not, congratulations and for that matter congratulations if you have done it before anyway. 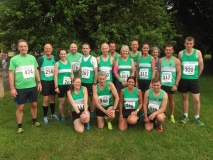 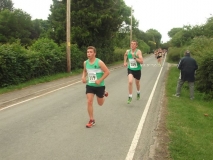 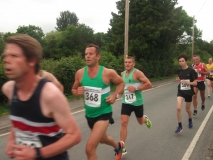 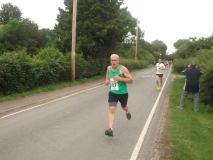 123456►
This entry was posted in Uncategorized. Bookmark the permalink.