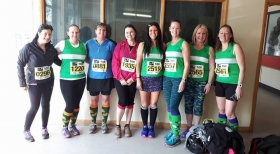 The St David’s Day Run was first organised in 2003 and was the idea of Mr Huw Lewis MBE. Mr Lewis wanted to organise an event highlighting the Wales’s national holiday and raise money for a local charity. Over the years the event has gone from strength to strength and raised thousands for local charities. As the run is run on the weekend closest to St David’s Day it always attracts some fantastic costumes.The run takes in some spectacular views of the capital whilst running around Bute Park. A coach full of FODAC runners took part in this 10K, for many it was their first competition run it also encouraged many families to take part, one of these were father and daughter Chloe and Richard [ Spike] Powles. This was Chloe’s first 10K. A FODAC winner was John Russell who took the MV45 prize.