Martin Drew and Chris Moore tackled this event on May 4th.  Martin writes: “Monumental. Ancient monumental, to be precise. Approximately 4 hours and 25 minutes after setting off from Avebury, Chris Moore and I dropped across the finish line of the Neolithic Marathon at Stonehenge. 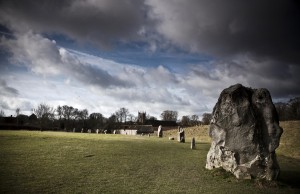 Behind us lay 26 miles’ worth of panoramic views, ancient earthworks, military firing ranges, potholes, rutted tracks, walkers, runners, cyclists, picturesque villages…the list goes on. We had agreed that we would cross the finish line together and stuck to the plan, matching our cadence so that we crossed the finish line at precisely the same time. It was my first marathon so I don’t have anything to compare it to, but I would describe the route as challenging – a considerable amount of ascent throughout – and I think it’s fair to say that we had no cause to complain about being cold! I have to say that the Wiltshire Wildlife Trust’s organisation was superb:plenty of water stations with portaloos situated at each one; bags labelled and shipped to Stonehange so that they were waiting for us when we arrived there; and frequent coaches to transport runners and walkers back to their vehicles at Avebury. Feels good to have a full marathon under my belt – yes, tarmac would have been a lot quicker, but I don’t think it would have been quite as memorable. We decided to forego the chance to visit Stonehenge since this would have involved a walk of three miles and our legs had stopped working by then. Maybe next time.” 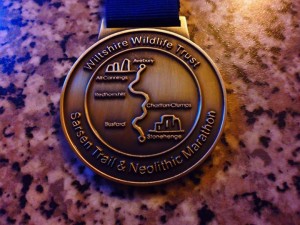