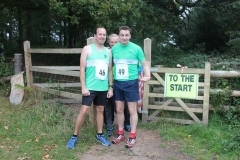 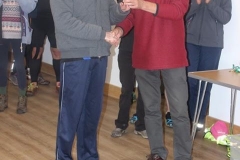 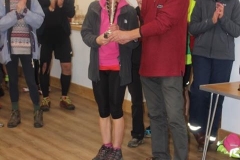 This is a race organised by FODAC, who were thrilled to be able to stage the event again at the fantastic rejuvenated Yorkley Community Centre and with all proceeds going to the Great Oaks Hospice. There were three races one for the seniors, one for Canicross both of 10K and one 2K for the Juniors. The weather was overcast which suited the athletes and especially the dogs.

There were some excellent performances especially from FODAC runner, Marcus Bennetto who is on top form and finished first in 36.41 the first lady home was another FODAC member, Helen Brown in 40.36. At this event there are trophies presented to the first male & female FODAC finishers , which of course they took. The Canicross race, which has to be heard to be believed with over 20 excited dogs ready to start. Local runner Kim Mazzukka with Ice set the pace and was first home in an incredible time of 34.47 she was followed by Zoltan Lesi, who finished a credible 8th in the mens category at last weekends ECF European Championships,representing Hungary. The Junior race was dominated by the Francis family with Cameron winning first boy and sister Maddie the first girl. Determined performances from all that took part.

Three FODAC athletes looking for a different challenge took to the streets of Amsterdam. The TCS Amsterdam Marathon is known for its fast and beautiful course. The start and finish take place in the historical Olympic Stadium. The Marathon course follows a part of the Olympic route along the Amstel River, past stately homes and a few windmills. This route offers beautiful rural scenery, which includes the Arena. The first Forester home was Matt Bond in 3.59.10 followed by Neville Turner in 4.09.59 and wife Sheralyn in 5.28.43