A glorious day greeted the 8 intrepid souls who met at 5 Acres (for many their 2nd visit of the day) at 12pm to head for the hills. We arrived just after 1.00 & after grounding Robert Freeman’s car we headed over the dam to the YH for registration with the hill looming ever larger fuelling the pre-race nerves. We met up with Scott Berry, Ivan & Lisa Medcalf-Woodward and then greeted by none other than … Kim Chester who was a) racing! & b) on time! This brought the FoDAC contingent up to full strength: 11.
The race started promptly at 2pm & 99 runners hared off downhill (????) along a wide forestry track which forms part of the Taff Trail before heading up gradually then a hairpin onto an old tramway which was very uneven as all the dirt had been washed away leaving large, loose rocks which made getting into a rhythm tricky. We crossed our first stile before traversing a grassy field and another stile onto tarmac before a hard left onto the open hillside & the proper climbing. James Dobbing had taken an early lead closely followed by Marcus Bennetto then myself (Julian Boon) but it was here that they began to run out of steam whereas I got into my stride & started clawing places back, eventually making it to the top first (FoDAC & 13th overall I think). There followed a steep descent where my left shoe (again) decided to try slipping off my foot giving me flashbacks to Darren’s Dash! Fortunately it was just the laces which had come undone & despite a wet bog section it stayed on though I lost a couple of places. A mile of relatively flat but very uneven tramway with branches sticking out at shin height, a tree hurdle & then a head banger of a tree immediately before crossing another stile and a sharp descent through a field & some woods followed before crossing the dam to the finish.
After cheering all the FoDAC runners in, we changed into warm dry clothes & headed back to the YH for refreshments & the prize-giving. The winner, Chris Jones from MDC, finished in a new course record of 34:08 beating the previous holder into 2nd place. First lady was Katie Beecher of Les Croupiers, in 40:50.  Marcus won a bottle of Cider & Blackberry for being first U23 & everyone said what a great time they’d had. 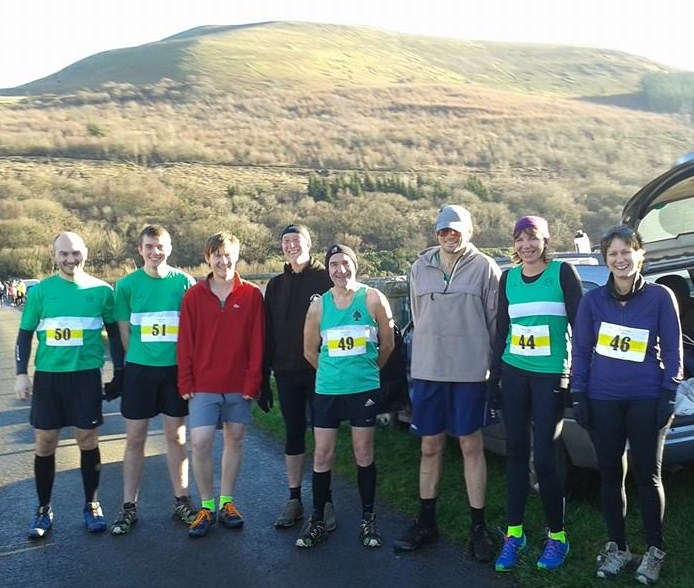